To get to Golgulsa from Seoul, it takes a roughly two-hour train journey to Gyeongju, the nearest city, and from there, a 90-minute ride on two separate buses through the countryside. On reaching the designated bus stop, it’s another twenty-minute walk along a stream lined with wild flowers before the first temple gate comes into sight.

That’s how Sarah Nicoll found herself at this obscure monastery in 2011. She was an English teacher working in Dongducheon, 36 kilometers north of Seoul. She had a two-week vacation and no plans for what to do with it. “I was just Googling things to do in Korea when I came across Templestay [an overnight stay program offered by many South Korean temples]. I looked at the Templestay website, and for some reason Golgulsa jumped at me. I didn’t know it was famous for martial art.

“After I tried Sunmudo training that first night, I knew that I was going to stay for the next two weeks. I just felt relaxed and alive and thankful for the experience by the end of it.”

According to Buddhist magazine Bulgyo Focus, there are nearly 1,000 historic temples all over South Korea, more if you count small and new establishments. Many are grander and more beautiful than Golgulsa. Some of them have their own specialities: painting, tea ceremony and even coffee drinking. But Golgulsa’s claim to fame is unique: It’s perhaps the only South Korean Buddhist temple that works to preserve a martial art tradition known as Sunmudo.

Sunmudo literally means a way of meditation and martial art. Combining structured movements with breathing techniques, it aims to enhance the practitioner’s mind as well as body. Its proponents argue that the tradition dates back to the Silla Dynasty (57 BCE to 935 AD), and that Korean monks have used Sunmudo to fight foreign aggressors, especially during the Japanese invasion in the late sixteenth century.

I first met Sarah, a 35-year-old British citizen, at Golgulsa three years ago during a chance visit. She is now an instructor at Seoul Sunmudo Centre near Changdeok Palace. I had been curious about her unusual career, and we met to discuss her path to becoming a martial artist and the appeal the tradition holds for her.

The following interview has been edited for length and clarity.

I am intrigued by people who turn their lives upside down to pursue certain passions. What was your life like before moving to South Korea?

Well, I am from the U.K. Born in West Yorkshire. I am the eldest of five siblings. We grew up on a farm in the country, near Kent. I got my bachelor’s in history at Canterbury Christ Church University and then did my master’s in international relations at St. Andrew’s University. I worked for an NGO and taught English in Prague. That’s when my then-partner suggested that we get out of our comfort zone and see what we can learning from living in a completely different culture. So in 2009 I found a job near Seoul and moved.

How did South Korea work out for you?

I liked the work, especially in my second job teaching at a foreign language high school. A lot of the students had high-level English skills. They had dreams and goals. But there was a sadness to working with them. It was a high-pressure, competitive and stressful environment. You want to support and take care of students, as a teacher, but at times there wasn’t much you could do to alleviate what they were dealing with.

On the personal front front, my city was a bit lacking in culture. I liked art galleries, live music, cultural events; that wasn’t much of that there. On weekends I was in central Seoul. I was lucky enough to make a few South Korean friends who were photographers or musicians.

To be honest, in 2011, I wasn’t planning on staying. I was thinking of something else. The work was affecting me.

Yes. I had a two-week vacation in July 2011. For some reason Golgulsa jumped at me. To me it looked wonderful. But I remember checking in very, very tired. And the girl who checked me in, she was giving me a long explanation of the temple and this and that, and I remember thinking, ‘Please hurry up and just give me my room key.’ She was this energetic, fresh temple volunteer. And I was this burnt-out person looking for sanctuary.

Then the training began. It was summer evening at the temple, a clear sky and trees all around. We were outside and had yoga mats out. We had a Korean instructor who didn’t speak very much English but it didn’t matter because his energy was very positive, very engaging. It wasn’t easy training by any means. But it resulted in a really great feeling. By the end, my muscles had opened up, and a lot of my tension was gone. When we were doing the final meditation, there was this amazing feeling.

I had booked a two-night stay, but after the first night, I knew that I was going to stay for the next two weeks. And I spent that time talking to all the foreign members of the staff, asking how they got there, what they were doing there, how they got to live there, and so on.

So you were already researching how to stay for good?

Yes, I decided almost immediately that this was what I wanted to do everyday. And I found out that some of the foreigners were short-term volunteers for three to six months. Some were instructor-trainees who had committed to a two-year program to get an instructor certificate in the end. [Since then, the program has been shortened to one year.] When I heard that, I thought I could live there for two years and do Sunmudo everyday. I could become an instructor.

I went back to work teaching English, finished out my contract and moved to Golgulsa in the spring of 2012. The temple helped me obtain a new visa for “cultural artists,” available to people who want to learn a traditional art. It could be dance. It could be Taekwondo. In my case it happened to be Sunmudo.

Tell me a little about living at the temple.

When you first start to learn, the main thing is to practice the basic motions over and over again. With this martial art training, you also do regular meditation practice to develop a sharp mind. Because you are living in a temple, you are also required to perform a lot of duties. Mine were welcoming guests, doing orientation and teaching how to do meditation.

I lived in a small room like in any Templestay program or at a hanok [a Korean traditional house]. In the staff quarters you have shared bathrooms and separate floors for men and women. Monks live separately from us.

Living in a temple also requires letting go of a lot of things. You get one day a week off. If you party the night away that day, your training is off for the next two weeks. So you quickly learn that any unhealthy habit or lifestyle is in sharp contrast to this experience. It requires a drastic transformation.

I can see it takes strong dedication. But what about money? How do you support yourself?

I live quite simply. Because I learned to do so at the temple. When you are an instructor trainee, the temple covers your accommodation and food — it’s free — and every now and then you get something like a gift from the temple. But you don’t get a regular salary, not if you are a trainee. Ideally, you get this instructor certificate and you start your own school. There is Sunmudo France with four schools, and in Germany, Spain, Norway and Switzerland, too. These are all instructors who have visited or lived at Golgulsa, learned Sunmudo and moved back. That is how you would make a life, by opening a school.

To tell you the truth, many foreigners come and go. Over the course of those two years I spent getting my instructor certificate, 12 other people came and went. Some of them made it to six months, some eight months, some a year, some longer. None of them finished the instructor program. For many reasons they say, no, I don’t want to do this any more. But there is one common factor. If you know 100 percent that you want to be a Sunmudo instructor, you will make it. But if you are doing it because you think it’s cool, because you want to live in a temple, it’s not enough to make it across the finish line.

Do you ever wonder if you made the right choice?

I didn’t in the beginning. You know, sometimes you get an instinct or impulse or something and you can’t explain why. You just know I need to go this way. Sometimes you just know. And as I started doing it, I knew this was the right way. But I didn’t know why. I did yoga before but didn’t have a martial art background or anything like that.

When I think about it now, and I have tried to figure it out — why did this happen for me? — many things were relevant to the decision. My past. Being the eldest of five. Being in leadership and teaching roles. Losing a parent at the age of two, and coming into contact with death and mortality at a very very young age. Growing up questioning what life is about, why we die.

Some might think that Sunmudo is about Buddhism, but there isn’t this heavy feeling of religious dogma to it. It’s more a tool for us to go into the world as healthier and more open human beings. And it allows us to manage whatever stress the world throws at you. Sunmudo makes me feel happy and balanced, and it’s rewarding for me to see the same positive transformation in students. It ticks a lot of boxes for me.

What’s next for you?

I moved to Seoul in the middle of 2016 to run Sunmudo classes in English and am also studying Korean on and off at Sogang University. The temple pays for my accommodation in the city. I achieved 3 dan, or level 3, in November 2015. I am due for the 4-dan test in 2020. I already have the instructor certificate but I will need to get to 5 dan before I can call myself a master. I haven’t calculated when I will get there. But the goal of Sunmudo is your own personal development, not to be in a competition or tournament.

Before, I had a good salary, and it didn’t work for me. I wasn’t content with it. And now I find that I have changed even more. If you do meditation and martial art everyday, it’s kind of jarring even just to attend a concert. Extravagance doesn’t appeal to me. Now things are simplified, and I enjoy it. In South Korea, Buddhist monks and Protestant pastors aren’t required to pay a dime of tax on their incomes. This exemption is set to end in 2018 — against vehement objections from Protestant churches. There has not been actual legal tax exemption for the income that religious 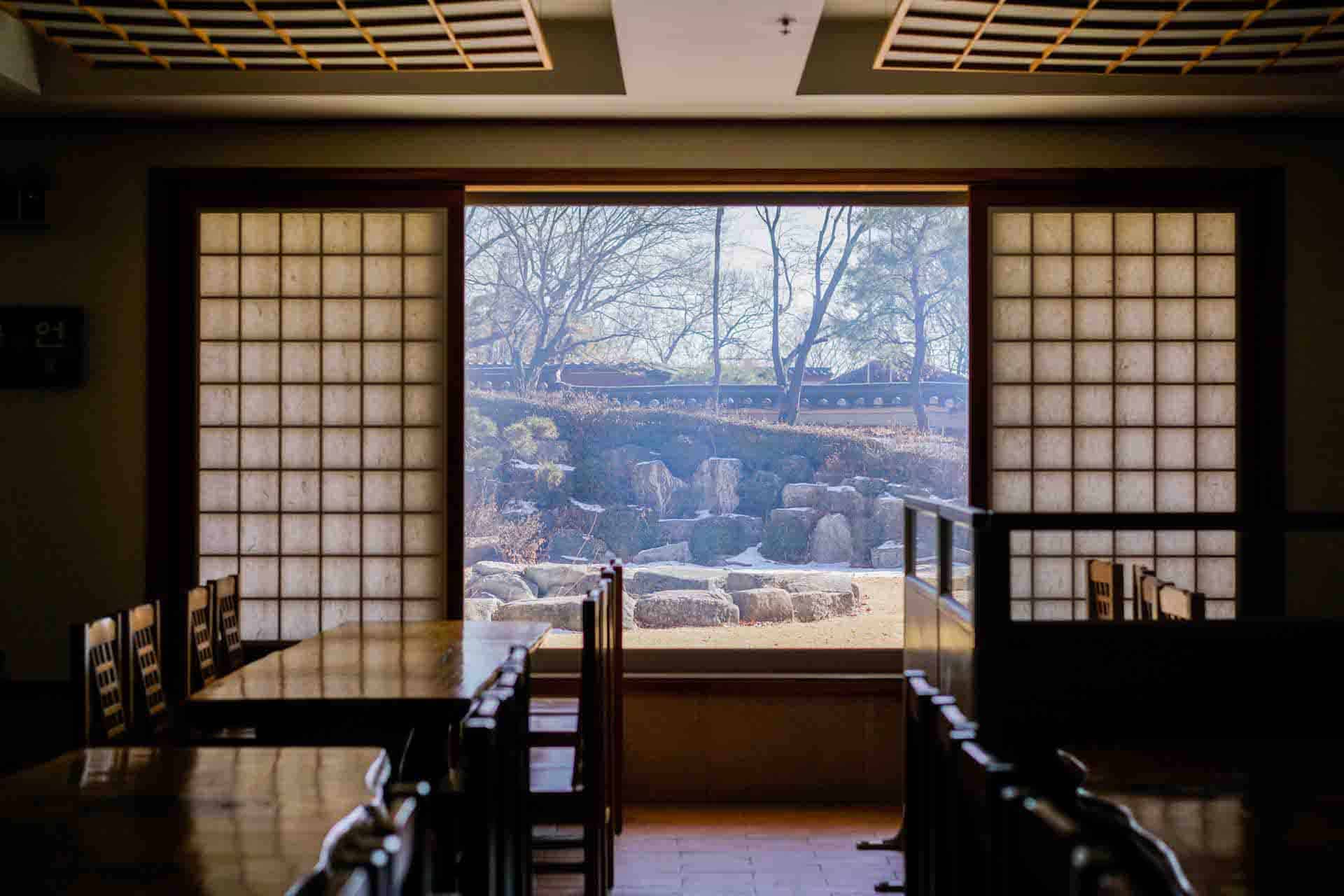 Typically known for fried chicken and barbecued pork belly, Korean food may not seem very vegetarian/vegan-friendly. But off the beaten paths in Seoul (and sometimes smack in the middle of it) stand Buddhist temples that offer clean and modest meat-free meals — even free of charge at times. In